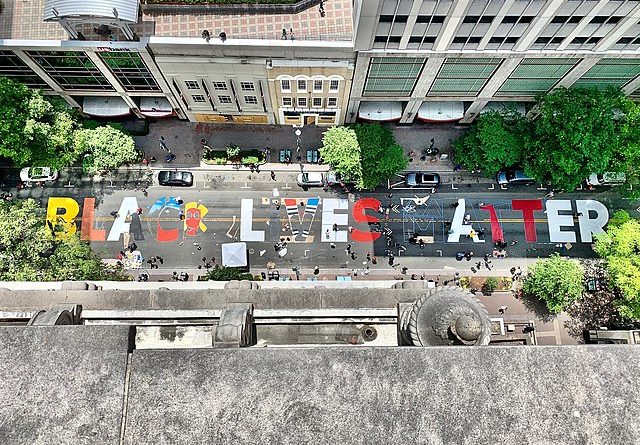 Following in the footsteps of Washington, DC, Brooklyn added a giant mural to its city-scape, declaring “Black Lives Matter” in bright yellow lettering the width of a city street.

Last week Mayor Muriel Bowser of Washington, DC, commissioned an identical mural stretching over a long length of the street leading up to the White House at 1600 Pennsylvania Avenue.

Both murals are political artworks enlarging the national debate and the protests that have engulfed the nation in the wake of the death of George Floyd at the hands of police in Minneapolis at the end of May.

Brooklyn’s mural begins at Harriet Ross Tubman Avenue/Fulton Street and continues for 565 feet to Marcy and Brooklyn Avenues in the Bedford-Stuyvesant neighborhood. The mural also includes the names of unarmed blacks who were killed in racially tainted attacks by police. There is also a row of coffins in twenty bars, to represent the year 2020.

Brooklyn Council Member Robert Cornegy, whose District 36 includes the area where the mural is, helped to get the project going. Also involved was the executive artistic director of The Billie Holiday Theater, Dr. Indira Etwaroo.

Painting began on June 13 and the bars and letters were done the next day. Finishing touches continued to be added for the next few days. More than thirty Brooklyn-based visual artists helped to create the artwork, joining artists Cey Adams and Dawud West.

“There’s a lot of things that have been going on lately, and for years, that have been questionable, or even reprehensible,” said West. “For people to take notice has been a task. So, this, actually, makes you take notice.”