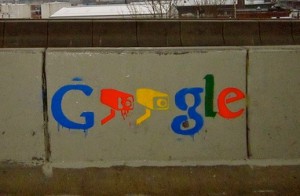 Graffiti is commonplace throughout Brooklyn, often making a statement involving a current event or trend. A recent depiction on the Pulaski Bridge in Brooklyn continued the tech trend that includes the “Stop Sopa” and a Guy Fawkes mask that symbolizes Anonymous hacking.

The new program will merge all previous privacy policies of its products into one, compiling every individual’s information in a single spot and sharing it with other Google services. Lawmakers, tech lovers and the Google-using nation are in a muted uproar with concerns for their online privacy.

“People are upset for two reasons. The first is that Google is just now making this new use of data explicit, and the second is that there is no way to opt out and still use any Google service,” said Dan Olds of the Gabriel Consulting Group. “It’s not that Google is collecting more information. It’s that they’re combining information from all of their various products and services and using it to laser-target ads at users. I think that some users and privacy advocates are looking at this as a slippery slope.”