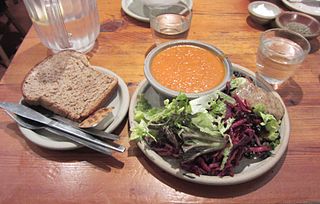 Only open for lunch, high-powered Brooklyn hotshots can take a well-deserved break during their off- hour at Govinda’s. The soothing atmosphere makes up for its lack of windows with lovely murals depicting Krishna and friends together with nerve-numbing chants and hymns broadcast over the sound system.

The menu changes every day and is moderately priced in the very affordable range. Reminiscent of a high school cafeteria are the plastic food trays lunch is served on. There is absolutely no meat, but that is in no way a negative aspect of the dining experience. On the contrary, diners expect, and are not disappointed with the restaurants thick and delicious soups, samosas, rajma, and kitchari. Not in the mood for Indian cuisine? Those in the mood for something a bit more western can indulge in eggplant parmesan and delightful cheesecake specialties. Even with no onions and garlic (which can incite too much passion) the meals are mouthwatering.

There is absolutely no pressure to convert to Hare Krishna, but the seating allows for mingling between strangers. Treat yourself to an elevating experience in the basement of the temple. Eat and meet something and someone new.