James Joyce’s magnum opus, Ulysses, takes place in Dublin entirely on one day, June 16th, 1904. Today there are several thousand Dubliners who take part in Bloomsday, named after Joyce’s main protagonist, Leopold Bloom, with readings and outings recreating the action of the novel.

But just because we might not be in Dublin doesn’t mean that we can’t also partake in the fun of Bloomsday, as it has also been established, as of last year, right here in Brooklyn. Dublin comes to Park Slope this Saturday has Joyce fans travel to five Brooklyn pubs. At each pub different actors will do readings from Ulysses while at each stop musicians will play traditional Irish standards.

In Dublin Bloomsday is almost like a national holiday says John Burns, one of the Friendly Sons of Saint Patrick whose members started Brooklyn’s own Bloomsday last year.

“Joyce is so descriptive of what’s going on around him that you can rebuild Dublin by using the book as a guide.” 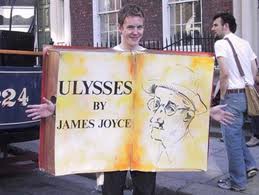 Declan Walsh, 42, of Red Hook is a Dublin native but came to live in New York 22 years ago.

“If we can’t do it in Dublin, why not do it in Brooklyn?”

Brooklyn District Attorney Charles (Joe) Hynes will be joining the show this year. He will be reading a speech that a character of the same name makes in the book.

“He has found his true calling for life, because he’s actually a character in ‘Ulysses,'” Walsh said. “Joe Hynes reads Joe Hynes, so it’s fun, and…he’s actually really into it.”

“It’s one of those books that unless you have a lot of help with it, it’s hard to get through,” John Burns said. He added that he finally finished the book when the group found a Joyce scholar to help them with a directed reading before launching Bloomsday in Brooklyn.

“People are very intimidated by this book, and it’s a great book you can tap into on a million and one levels,” Declan Walsh added. “It’s a book that needs to be read aloud. It’s a musical book.”