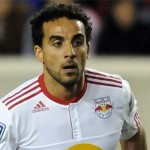 A collective groan could be heard by New York Red Bulls fans on Monday night as five-time all-star Dwayne De Rosario was traded to D.C. United. De Rosario, 33, is one of the most valuable players in the league and certainly one of the most decorated.

“DeRo is the real deal. He’s as good as this league has ever seen.”

De Rosario has spent less than a year with the Red Bulls, having come to them from Toronto early this season. General Manager Dave Kasper said, about acquiring De Rosario, “He gives us a great attacking option. It enables [Olsen] to put together a good group of attacking players. How it works out remains to be seen, but as of today, we have a nice addition to our lineup.”

De Rosario will be making $493,750 this year, which makes him the highest-paid player on D.C. United’s active roster.

Now, De Rosario will be going up against his former club when D.C. United faces the New York Red Bulls in the Red Bull Arena on July 9th.