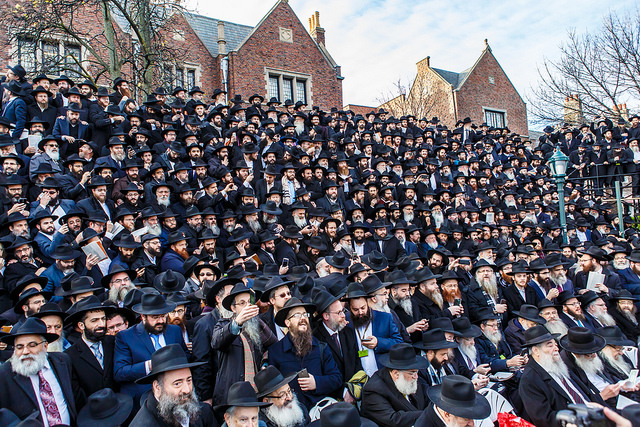 The world’s largest gathering of Orthodox rabbis takes place each year in Crown Heights when about 5,600 Chabad rabbis meet for four days in the fall. They come together for the annual International Conference of Chabad-Lubavitch Emissaries. This year’s opening day was October 31st, and the final day was Monday, November 4th.

One of the highlights of the event each year is an enormous group photograph organized in front of the International Headquarters of the movement, at 770 Eastern Parkway in the center of Crown Heights, Brooklyn. Usually the mood during the photo shoot is one of lively friendship and joy as all the colleagues meet together to memorialize their attendance with a photograph.

Sadly, this year the mood was one of restraint, sadness, and solemnity due to the shocking massacre that took place in a Jewish house of worship in Pittsburgh, Pennsylvania just a little more than a week before. The horrific anti-Semitic attack took the lives of 11 innocent people, including a 95-year-old Holocaust survivor and two brothers with disabilities. A few of the emissaries were from the Pittsburgh area:

“Especially for us in Pittsburgh, it was [inspiring] knowing that everyone is here with us,” said Rabbi Yisroel Altein of the Chabad of Squirrel Hill. “So many messages from the rabbis and their communities reaching out to us — it was very inspiring.”

Rabbi Altein, arrived in Brooklyn after the Sabbath so he could spend the Sabbath with his community, which overflowed with worshipers who came together to support each other and mourn their community’s loss.

The gathering of rabbis came from over 100 countries and were led by the delegation of rabbis from Pittsburgh in prayers and song in honor and memory of the slain Jews after the photo shoot was completed.