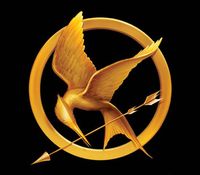 We all know how wonderful and creative people in Brooklyn are – but it’s nice to have an outside reminder once in a while.  The widely popular Hunger Games trilogy which is now a film as well sports an emblem created by a Brooklyn native.

The Mockingjay pin that represents hope for the Hunger Games, was designed by Pratt Institute design professor Tim O’Brien.  As O’Brien recently said in a statement,

"It is incredible to watch the illustration I created for the Hunger Games used all over the world. Seeing the image everywhere is a real 'pinch me' moment."

O’Brien originally designed cover illustrations with the Hunger Games publisher Scholastic Inc.  He collaborated with designer Phil Falco to create the book covers for the Hunger Games series.  Then, the producers of the recently-released film decided to adapt O’Brien’s image for all of the movie posters, propelling the mockingjay image to new levels.

As O’Brien explained in a profile in The Philadelphia Inquirer,

"I've done postage stamps, covers. I've never had an illustration that was so universally recognized."

Recognized, indeed, as will Tim O’Brien, the Brooklyn-based artist, continue to be as a result of this work.

Even the preview for the Hunger Games movie is filled with images of O'Brien's symbol.