As New Yorkers begin gearing up for another summer of fun in the sun at the city’s many parks and beaches, smokers will have to find alternative venues for lighting up.

Beginning on Monday the air in New York’s public parks, beaches and pedestrian plazas will be significantly fresher, as it will be illegal to smoke in these areas.

“This will protect New Yorkers from second-hand smoke and keep our parks and beaches clean,” said Susan Kansagra, the assistant commissioner for the Health Department’s bureau of tobacco control.

In addition to protecting visitors from the health dangers of second-hand smoke, Ms. Kansagra added that the law will ‘de-normalize’ the smoking habit, since it will be banned from places where families go, sending the message that smoking is simply not an acceptable behavior in our society.

The law is meant to be mostly self-regulatory. Although transgressors are at least in theory susceptible to a $50 fine, there will be very few Parks Department officers available to enforce the new regulation.

There are many other counties across the country that have similar laws restricting outdoor smoking, despite the fact that there is a vigorous debate about whether such measures make smart public policy.

“It definitely pushes the boundaries of what public health law can do,” said James Colgrove, a Columbia University public health professor and author of “NYC: Epidemic City.”

“Outdoors, the air-monitoring studies suggest smoke dissipates and there is virtually no health risk to anyone who is more than a few feet away,” he said. “It’s using public health law for something that public health law is not always used for and that many people would not approve of.” 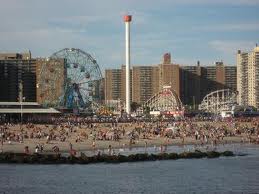 There are 1,700 parks in New York City, and 14 miles of beaches and pedestrian malls. The ban was passed last February by the City Council, even in the face of the concern of several lawyers that it violates individual civil liberties.

In 1995 New York became one of the first cities to make smoking in restaurants a crime, and since then many other cities around the country have followed suit. The new law will include such well-traveled places as Times Square, Central Park, and Coney Island.