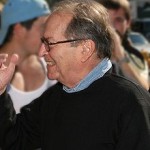 An icon of New York just passed away. Sidney Lumet, born in Philadelphia to Yiddush actors, lived the majority of his life in New York. Much of his work was shaped by his experience in New York as he painted pictures of right and wrong and made viewers think.

Serving as a radar repair man in the Second World War, Lumet then went on to direct theater productions in New York. He began his film career in 1957 with the classic “12 Angry Men” and went on to make other iconic films such as “Long Day’s Journey Into Night” “Serpico” “Dog Day Afternoon” and many others.

He came to the movie industry at a perfect time, when Hollywood was transitioning from viewing film as a way to show idyllic life to one that started to show the more realistic views of the world. He was said to put his actors through lengthy and very meticulous rehearsal periods and then to shoot he films at lightning speed.

His best films were all set in New York and some have called him the most influential American director of the last 50 years. Many more recent films certainly show influences from Lumet including films from renowned directors like Spike Lee.

In his 1996 autobiography “Making Movies” Lumet captured much of the energy that made him such an artist. He explained that you don’t see good style, but rather that you feel it.

Lumet was nominated for the best director Oscar for times before finally receiving his due with an honorary Academy Award in 2005. Along the way in his career, he worked with such greats as Marlon Brando, Paul Newman, Sean Connery, Ingrid Bergman, Al Pacino and many others.

New York — and the entire film world — will sorely miss the power of Sidney Lumet.