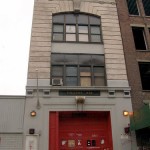 Williamsburg activists have kick started a campaign to save the People’s Firehouse by raising money on Kickstarter.   Their goal is to raise at least $20,000 just in the next week so that Engine 212 can be turned into a community center.

It all started in 1975, when a group of neighborhood residents demanded that Mayor Abe Beame not close down Engine 212 due to money constraint. Waging a 16 month battle, they occupied the historic Wythe Avenue firehouse to demand that it be saved — and won. Engine 212 went on to function and to fight fires for another 25 years.

As one of the current activities, Paul Veneski, and the son of one of the original protestors, said,

“This building is a symbol that says, ‘You can fight City Hall and win.”

Now, the city has agreed that the Northside Town Hall group can remake the building into a social services organization.   The People’s Firehouse Inc. and Neighbors Allied for Good Growth want to use the space for their work, which includes job-training and dispute mediation. They also want to open up the ground floor as a space for performing arts groups.

As they describe their mission on their Kickstarter page,

“The cultural and community headquarters will both share the work of the neighborhood’s talented artists with performance and gallery space, and house the civic organizations that protect their rights as residents–allowing Greenpoint and Williamsburg to continue to be cultivators of and home to the nation’s most exciting new and established musicians, artists and dancers for years to come.”

$1.1 million has been put up for construction funds, but they have to raise about $500,000 by next June in order to collect those funds. They are half-way to their goal at the moment.   While raising money on Kickstarter, they are also hoping to bring in around $70,000 today at Taste Williamsburg Greenpoint, an annual foodfest.

As Evan Thies, a consultant and 2009 City Council candidate said, “Blue-collar families are hanging on by a thread in the neighborhood; they need our help.” He continued,

“If we don’t raise the money by June, that would be a tragedy. We’d lose an incredible opportunity to save a piece of Brooklyn’s history.”