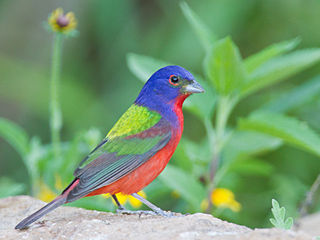 Some people ogle movie stars, others like sports heroes, and then there are those who plotz for plumage. If you are one of the latter, then get out your binoculars, and head out to Prospect Park in the heart of Brooklyn, and see if you can’t get a gander of an extraordinarily rare site: a beautifully colored Painted Bunting.

This bird, known to some as the “Liberace bird” is remarkable in its appearance. A little finch-like creature, he has a brilliant indigo head, bright yellow shoulders, and wings which transitions smoothly from chartreuse to green. Insuring that all the color groups are included, his breast is a lovely combination of scarlet and burnt sienna.

The bird was visible for four straight days, and has never before appeared in Brooklyn. It is almost never seen anywhere north of Arkansas. If you want a glimpse of this bird you will have to fight the crowds, who must try and get a view of him between the brown native grasses planted outside the LeFrak Center skating rink complex.

Speculation about why the bird might be visiting Brooklyn raged. To see an adult male so far afield is quite perplexing, considering their usual winter quarters are Florida and Mexico. Perhaps he was carried on a wind from the west, and considering the warm November temperatures New York has been experiencing, decided to stay. The native grasses could also be a factor attracting the fine feathered friend.

One observer, Scott Schulman, manager of LeFrak Center was awed by the site of this eye-popping creature.