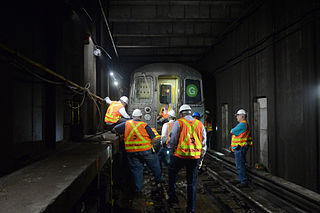 Mounting problems have revealed the decaying state of the vast New York City subway system, a system that in many ways is the circulatory system keeping the city alive.

The most recent incident involved a derailment near the Brighton Beach station at around 9am last Friday. Luckily no injuries were reported when one set of wheels on the second car fell off the rails. Another train came to collect the passengers, but service was seriously disrupted on the B and Q lines during the busy morning commute hours.

This derailment came on the heels of June’s incident in Manhattan which caused injuries to over 20 people.

Other system malfunctions have interfered with service or caused harm, such as signal problems in Manhattan, a fire on the subway tracks in upper Manhattan, sending nine people to the hospital, and a train in Queens with mechanical issues.

Interim director of the Metropolitan Transportation Authority, Veronique Hakim, said that the Brooklyn derailment was being investigated, but it was not immediately clear what caused the incident. There were about 135 people on board, considered a “light load” for the train.

“We are sorry this occurred this morning,” Ms. Hakim said.

Who is actually responsible for the general upkeep of the subway system seems to be unclear. Joseph J. Lhota, chairman of the MTA, urged Mayor Bill de Blasio to make the necessary repairs to the aging system. Mr. Lhota said he has an emergency proposal to be released soon, saying that the city and the state must take responsibility and provide the funding for the repairs.

Mr. Lhota agrees with Governor Andrew M. Cuomo, who admonished the New York mayor for not taking responsibility for the subway system that is owned by the city.

Transit authority supporters have a different view, saying that the Governor needs to take responsibility, since he controls the MTA by selecting the chairman and involving himself more and more in the agency’s activities.