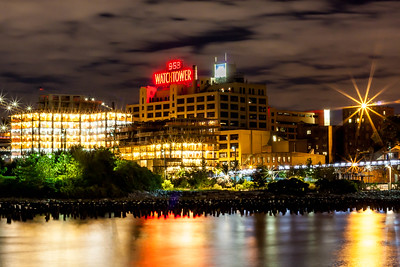 Brooklyn has a new sign welcoming visitors and guests alike Displaying the word “Welcome” in 15-foot-high bright red letters, the happy new message will be lit for the first time on November 27, 2019, on the 50th anniversary of when the previous message was first broadcast.

That message said “Watchtower,” and it was spread by the Jehovah’s Witnesses beginning in November 1969, and continuously shining (except for during blackouts) until 2017, when the building’s new owners dismantled the old sign.

The new owners of 30 Columbia Heights in Brooklyn Heights are a consortium of developers which includes LIVWRK and CIM Group. In 2017 they took down the sign on what is going to become an office complex called Panorama. But taking the sign down was a lot easier than figuring out what to replace it with.

In 2018 the Board of Standards and Appeals finally decided that a new sign could take the old one’s place.

The developers say that the new sign was created by Morris Adjmi Architects. It is 80 fee long, and will also display the time and the temperature, which was always a part of the building’s display. So New Yorkers and their guests can say ‘good-by’, officially, to ‘Watchtower,’ and say ‘hello’ to ‘Welcome.’