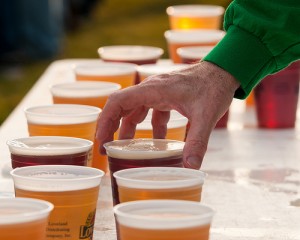 You never know what some of your creative neighbors are doing in their spare time. Douglas Flamm happens to be brewing beer in his spare time when he’s not selling rare and art books. At the Brooklyn Wort competition last month, his stout created with oysters and called a “Moyster” was named the best in the field.

Flamm explained that his inspiration for the Moyster came partly from reading Mark Kurlansky’s book “The Big Oyster: History on the Half Shell.” He wanted to pay homage to the unusual combination, with the long history that the beer and oyster combination has.

And his winning Moyster joins a long list of other unique beers that he creates, all of which have been named by his son and daughter. Ages 7 and 10, they’ve named one beer “Beater” for a position in Quidditch started by Harry Potter.

As he said about his inspirations in Brooklyn,

“I think Brooklyn is really enjoying a great food and drink movement – it is getting back to the homemade and the search for excellence in all that we eat and drink.”

The Brooklyn Wort is held twice a year and is a home brewing competition. It includes 25 of the best home-brewed beers in Brooklyn and offers entry to people to come and taste a sample of each. Visitors can then vote on their favorite ale, crowing a “people’s choice.” In addition, a blue-ribbon panel of judges which included such beer-makers as Brooklyn Brewery and Kelso, picked their winner.