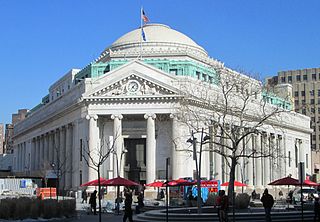 The stately neo-Roman former Dime Savings Bank of New York building is about to make its debut on the real estate market, offering up some wonderful fantasies about what that space can become.

Owned by JPMorgan Chase, some say the building could sell for as much as, or even more than $100 million.

Situated at 9 DeKalb Avenue, the building features a domed roof, a grand interior with a rotunda surrounded by huge red marble columns, and about 100,000 square feet of space. JPMorgan hired brokers Bob Knakal, James Nelson and Stephen Palmese of Massey Knakal Realty Services to market the property. JPMorgan already has a new location, 490 Fulton Street, which they plan to inhabit right after the buildings sale. The building itself has landmark status, and one of the possibilities for it after the sale is to turn it into an events space. It brings to mind the giant former Bowery Savings Bank hall which now houses the caterer Cipriani across from Grand Central Terminal. Today it is one of Manhattan’s most popular events venues.

“This is an incredible asset that is one of the best buildings to hit the market in Brooklyn,” Mr. Knakal said. “It holds a lot of exciting possibilities.”