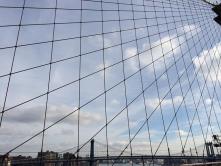 This past month the Smithsonian’s National Museum of the American Indian in New York opened its brand new exhibit. It was titled “Infinity of Nations” as a derivative of the French missionaries’ description of the peoples of the New World as “an infinity of nations” which opposed their original expectation of the land as being untouched and uninhabited.   The exhibit features more than 700 artifacts found in North, Central and South America, from ancient to modern times. The museum staff chose objects for their esthetic, cultural and historical significance, which they identified with the help of 60 native American leaders and historians.

Many of the artifacts testify to the fact that the Americas were   interconnected long before it was discovered by Europeans. A vast range of societies inhabited the Americas, from small farming, hunting and fishing villages to empires ruling from great cities. The objects also reveal much about the traditions and lifestyles of different tribes, such as marriage rituals, artistic creativity, military conflict and even sports. A featured low-relief illustrates a man about to catch a bouncing ball. Two hieroglyphs identify him as an athlete. The exhibit also includes artifacts which prove long distance trade operations like the ancient stone projectiles and banner stones which were discovered in areas far away from where the stones were first quarried.

The title of the exhibition derives from French missionaries who as early as 1626 described the peoples of the New World as “an infinity of nations.” The expression captured the French impression of the Americas as lands populated with a multitude of indigenous peoples, “rather than being the pristine and uninhabited New World of European imagination,” said Ganteaume.