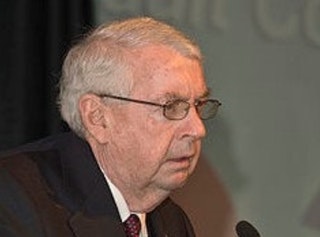 After three years of deteriorating health following a stroke, former Brooklyn District Attorney Charles “Joe” Hynes passed away on February 5, at the age of 83. He was surrounded by his family when he died in a hospice in Delray Beach.

Hynes worked as Brooklyn DA from 1990 until 2013, the year he lost his job to Kenneth Thompson, who has also since died.

“My heart goes out to the family of former Brooklyn District Attorney Charles ‘Joe’ Hynes,” said Adams. “Joe’s family is in our prayers.”

Hynes began his career in public service in 1963 with a job working for the Legal Aid Society. In 1969 he joined the office of the Brooklyn DA and became the Chief of the Rackets Bureau in 1971. He gained some notoriety in 1987 after prosecuting three men of a horrible hate crime in Howard Beach which resulted in the killing of Michael Griffith. Hynes can also be credited with launching ComALERT and GRASP, two programs that help parolees and teenage girls returning from incarceration. He also started one of the country’s first domestic violence departments.

He was also the recipient of several honors, including: the Minister of Justice Award in 2005; the Lawyer as Problem Solver in 2008 from the American Bar Association; and The Hogan Award from the District Attorneys Association of the State of New York, in 2011.

“Mr. Hynes was a lifelong public servant who devoted his life to the borough he loved,” stated District Attorney Eric Gonzalez. “My deepest condolences to his widow, Pat, his children and his grandchildren.”