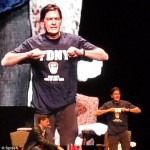 Whether you love or hate Charlie Sheen, he’s certainly hard to ignore these days.   Sheen just took on New York, giving two shows in the City as part of his Torpedo of Truth tour.   After being heckled and booed at his Friday night show at Radio City Music Hall, he returned on Sunday for a second performance to much better reviews.

During his Sunday night performance, Sheen interacted with the audience and acted more natural — or as natural as he is able to be — rather than working from a set script.   He received a standing ovation as he ripped off his John Lennon New York City t-shirt and threw it to a woman in the crowd, only to then put on a Fire Department New York t-shirt as a tribute to the fallen heroes of 9/11.

During the show, he apologized for calling Two and a Half Men creator Chuck Lorre and his former co-star Jon Cryer names and he called Former New York Mets baseball player Darryl Strawberry and Insider the Actors Studio host James Lipton onto the stage.

If ticket prices are any indication, even this small salvage of his reputation during the Sunday night performance isn’t helping Sheen. Once priced at $158 a ticket, ticket prices were seen as low as $30 after the disastrous Friday night show.