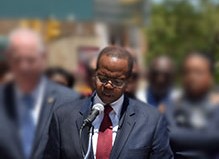 Only five days after announcing publicly that he was ill with colorectal cancer, Ken Thompson, Brooklyn District Attorney, is dead at age 50. He died at Memorial Sloan Kettering Hospital surrounded by family members.

Although diagnosed this past spring, he carried on with his duties until last week when he appointed his chief assistant, Eric Gonzalez, to head the office until he won his battle with cancer.
“As a man of intense faith, I intend to fight and win the battle against this disease,” Thompson said.

Thompson’s wife Lu-Shawn wrote on Facebook: “The world lost a great man. Rest in Peace to my husband.”

said: “I am profoundly saddened. Ken was a dedicated public servant who embodied the highest principles of the law.”

Thompson was known for ordering his office to refrain from prosecuting low-level marijuana arrests. This was partly so he could dedicate more resources to violent crimes such as rape, gun crimes, and domestic violence. He also wanted to spare New York youth from “the burden of a criminal record.”