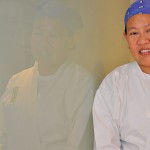 If you’ve been trying to get a reservation at Annisa in the West Village — fear no more. Now, instead of waiting for that table, you can set your own table and make the same delicious foods that owner Anita Lo makes for the hot eatery.

That’s because Anita Lo has just put out her first cookbook, “Cooking Without Borders.” In it she offers some of her secrets and provides home cooks with some delicious recipes. She explained that,

“I have always tried to keep my dishes and menus original in an attempt to engage – and, sometimes, challenge – people’s taste buds.”

Fusion with a Bit More Built In

Lo’s style of cooking is best characterized as “fusion” style, with influences from her Shanghai father, her Malaysian mother and her German stepfather. As she said, “Although I often think of myself as a fusion chef in the original sense of the word, in some ways that’s an oversimplification. While I celebrate Asian flavors and my identity, too often the rest is overlooked … however, my grounding is French. Not only is it my most proficient second language … it’s also the food I know best.”

Most of the items in her cookbook can be found at the neighborhood store, or in a nearby specialty market. And who knows, after cooking a bit, you just might be able to go up against Mario Batali on “Iron Chef.”