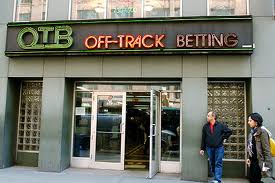 Off Track Betting, better known as OTB, began its existence back in 1971 in order to bring in much needed revenues as well as weaken the many “bookies” roaming the land, bringing in income and not declaring their hard earned dollars to the IRS.

In its heyday OTB was a popular hangout for many. Today, however, the last three parlors still open will close their doors permanently. The corporation has not been taking bets for the past week, and has only been open the past several days to pay out any outstanding accounts.

Most affected by OTB’s demise are elderly gentlemen with not much else to do. As Tommy Hellstrom, 75-years-old put it, “We’ve got people here who can’t live without it. It’s Better than sitting at home with those senile people” referring to the people he lives with at his assisted-living home down the street.