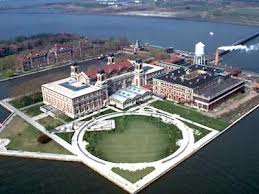 Beginning on October 1st the public will be allowed to visit the Ellis Island Hospital for the first time in 60 years. As part of the opening an art exhibit by artist JR will be on display. Featuring old photographs superimposed on the walls and doors of the hospital, the exhibit, “Unframed-Ellis Island,” evokes a time during the first half of the 20th century when about 1.2 million immigrants passed through the hospitalâ’s doors between 1901 and 1954.

Visitors will be led through the corridors of the hospital wearing hard hats. During the 90-minute tour they will visit the laundry building, infectious and contagious disease wards, kitchen, staff housing, autopsy room and more. During the entire half century that the hospital was in use only 3,500 of the immigrants passing through there died.

“This is a part of the history of immigration that is really not well known” museum historian Barry Moreno said.

“for people who live in this area that see the Statue of Liberty every day, or that hear about Ellis Island every day. Itâ’s something new for them to come back and see.”