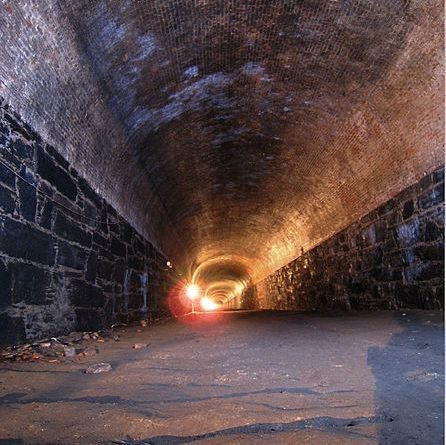 Twice abandoned, the oldest subway tunnel in the world has been re-incarnated as a chic and moody bar known as Le Boudoir. Here’s the story. Back in 1844 Brooklyn built the world’s first subway when it constructed the Atlantic Avenue railroad tunnel. It was used for 16 years, and then shut down, but it developed an afterlife of its own as a source of scary urban legends involving monster rats and alligators.

The tunnel was all but forgotten when, in 1980, amateur historian and daring engineer Bob Diamond found the long-lost Brooklyn version of Atlantis, right underneath a manhole. Diamond led tours down into that manhole until 2010 when the city told him to cease and desist from his explorations of the nether world of abandoned subway tunnels.

Only four years later, in 2014, Patricia Ageheim and Tarek Debira were renovating Chez Moi, their jointly owned restaurant on Atlantic Avenue. While working in the basement of their property, they decided to break down a wall and see what was on the other side, suspecting that the famed tunnel was at hand. Low and behold, as the wall came down, a hidden, secret chamber was revealed. The partners decided to take advantage of their find and create a special space for New Yorkers looking for a dark and different type of experience.

Le Boudoir pays homage to the legendary Marie Antoinette, the ill-fated French Queen who was guillotined during the French Revolution. She was well-known for her extravagant taste, and some of that overindulgence was recreated in the opulent décor. Guests enter through a deceptive bookshelf in the restaurant upstairs. The decorative style includes an abundance of gilding and rococo-style furnishings. There is a bust of Antoinette which is really a tap for drinks, a wooden, antique-type toilet, and a doorknob that somehow made its way to Brooklyn from the mother of overindulgence, Versailles.

The food also harkens back to the good old days of fabulously wealthy French royalty, including crispy frog legs, truffle-mushroom croquettes. Drinks are equally enchanting, such as the Rococo– made with oolong tea and Kaffir lime; and the Smoke & Mirrors—a concoction of blueberry-lavender cordial and bergamot.

If you’ve ever dreamed of having a drink with the last French Royals, this is the next best thing. No reservations are taken, and Monday nights feature jazz. Located at 135 Atlantic Avenue.