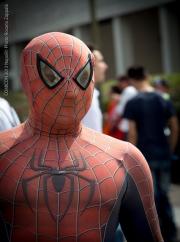 The first preview performance of the most expensive Broadway production in history took place on Sunday night. “Spider-Man: Turn Off the Dark” cost $65 million to produce, but its high price-tag was not a guarantee that the show would proceed without some initial glitches. The show had to pause five separate times for technical problems in need of fixing. The first act ended a bit too soon due to a dangling and embarrassed Spider-Man stuck ten feet above the audience.

The second act was spoiled by some audience cat-calling sparked by another one of the shows unplanned pauses.

It would be quite unusual for such an ambitious show to preview without some problems, and there was advanced warning by the creators of “Spider-Man” that audiences should indeed not expect perfection since the show is far from completion.

“Spider-Man” cost more than double the previous record-holder for expensive Broadway fare, outdoing the extravagant production of “Shrek the Musical,” now pushed back to second place.