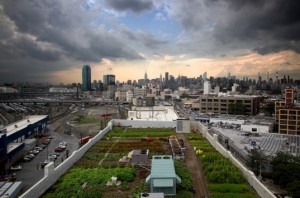 Brooklyn Grange just celebrated its first harvest from its rooftop farm in the Brooklyn Navy Yard.

The farm originated in Queens, but its many environmental benefits led it to Brooklyn as well. The DEP’s Green Infrastructure Grant Program is one of the garden’s primary benefactors; they provided $592,730 of funding for the project.

On his tour, NYC Mayor Michael Bloomberg admired the salad greens, rainbow chard, basil, eggplant, ground cherries, kale, and cucumbers that currently adorn the 43,000 square-foot space. His excitement was apparent as he flaunted the many advantages of the rooftop project, including insulation from heat and cold. The farm will also absorb over a million gallons of storm water throughout the year, keeping streams, harbors and canals clean.

“This is one of the biggest projects we’ve funded as part of our Green Infrastructure program and will help us meet our PlaNYC goals for a greener, greater New York” he said.

The new farm expects an annual crop of 20,000 pounds of fresh produce. Clover and vetch will be planted during the winter months to prevent soil erosion. Vital nutrients will also be restored in this way. Around 1,500 pounds of honey will also be produced thanks to the Apiary at the Brooklyn Grange.

The Grange did not have an easy journey, though. Marty Markowitz, President of the Brooklyn Borough, has assured that similar gardens will have an easier time getting off the ground in the future.

“Here in New York, we don’t have acres and acres of land to grow fresh food, and that’s why I’ve been advocating for the changing of zoning laws to maximize rooftop space and open up our borough’s industrial buildings for growing fresh produce.”