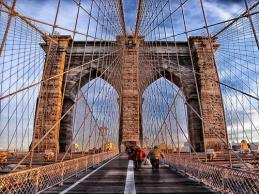 Brooklyn takes a lead role in one of the year’s first television miniseries, We Are: The Brooklyn Saints.

The series, produced by Netflix and directed by Rudy Valdez, focuses on an inner-city football program for elementary and middle school children in East New York. While sports documentaries are almost as old as the television and film industry itself, Saints stands out for its unorthodox approach: Rather than viewing the program through the lens of the poverty-stricken neighborhood, Valdez’s starting point is the football program itself and coach Edwin Gawuala.

From there, the series pans out to examine the lives and culture of the surrounding neighborhood.

Valdez told IndieWire, an online magazine that covers the independent filmmaking industry, that the primary goals of the series were to avoid clichés about inner city sports programs, and especially to give voice to the lives and personalities of the people on and around the team.