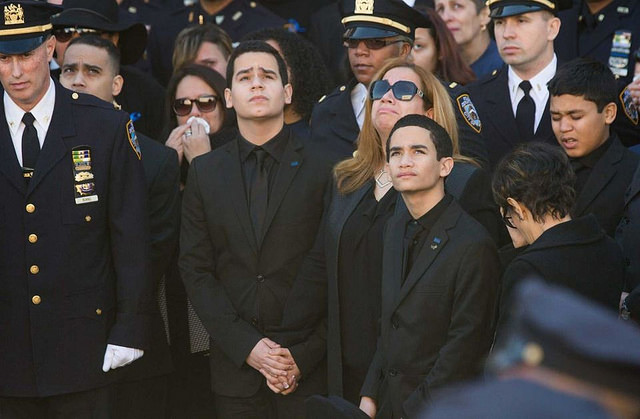 On Saturday thousands of mourners came to pay their last respects to Rafael Ramos, one of last week’s two murdered NYPD police officers. The funeral took place at the Christ Tabernacle Church for the 40-year-old married father of two.

Ramos was assassinated along with his partner, Wenjian Liu, 32, while they were sitting in their patrol car. Their murderer, Ismaaiyl Brinsley, killed himself shortly after shooting the two officers. Brinsley had posted on social media before the attack that he wanted to “put wings on pigs.”

New York City Mayor Bill de Blasio, who has been censured by the police department for his comments about the way law enforcement has been treating blacks, eulogized Ramos.

To show their distrust and anger with previous remarks made by the mayor, many of the police officers in attendance turned their backs on him when he took to the podium. De Blasio had remarked a few weeks ago that he was fearful about how police might treat his own son, who is bi-racial.

In addition to much of the NYPD, there were officers from all over the country at the funeral, all wearing blue uniforms and white gloves. The thousands were crowded into the streets surrounding the church, watching the speakers on big screens peppered throughout the area.

Vice President Joe Biden offered words of consolation to the family and friends of Ramos, as well as the families of all law enforcement personnel. He said that most people take the sacrifice police officers make for granted, and only when horrible events like these take place do they “become aware of the sacrifice they make every single day.”

Ramos’ 13-year-old son, Jaden, wrote on his Facebook page on the same night that his father was murdered: “It’s horrible that someone gets shot dead just for being a police officer. I will always love you and never forget you.”

At Friday’s wake and memorial service Jaden said: “Dad, you were my best friend. I’ll miss you with every fiber of my being. You are my hero.”