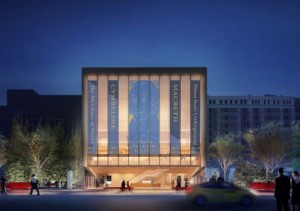 For the first time in almost 50 years, Brooklyn is building a classical theater. Located near the Brooklyn Academy of Music, the theater reflects the cultural growth of the area.

This past Monday, Theatre for a New Audience celebrated as they topped off their construction in the Borough. One of the leading theater troupes in NYC, the group is most famous for its unique approaches to Shakespearean classics and other masterpieces.

The new Fort Greene scene covers 27,500 square feet, and was sponsored by private investments, as well as city and state funding. Costing $62.5 million, the building features 3 stories, a 299-seat theater, sporting spaces, a lobby and a rehearsal room.

“We have never had such a place. We have had work, we finally have a place in a community” said Jeffrey Horowitz, Founding Artistic Director of Theatre for a New Audience.

“We’re here to celebrate the iron workers and the masons who have brought us to the construction but it’s also a great time to celebrate all of our partners that have helped bring us here.”

“They were looking for a kind of high-tech theater workshop- somewhere where they put on a lot of classical plays, a place where they could experiment, try new things, look into new things, move the room around” he said.

But, the subways lines lie directly below the building.

“The front two-thirds (of the building) are actually sitting on eight-inch-thick rubber pads” said Lynch. “It’s hard to believe it’s true… like the whole thing is kind of floating on pads, then the back of the building is separated by two inches, so it actually doesn’t even touch the front of the building at all. So all the vibrations from the subway kind of die in the rubber pads before they get into the auditorium.”