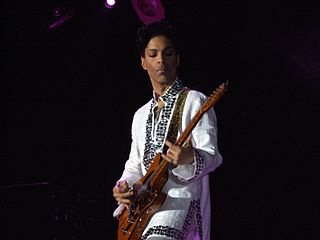 Within hours of the news that Prince (Rogers Nelson) had died, Spike Lee, the iconoclastic film director, held a block party outside the premises of “40 Acres and a Mule Filmworks” studio in Fort Greene, Brooklyn.

Hundreds of fans of the iconic rocker met to celebrate the life and music of Prince, whose style and genre of music is outside any definable box.

Describing the unlikely “party,” 38-year-old Rob Robinson said, “Tonight is about the feelings Prince evoked in all the people who ever heard his music. Many musicians master an instrument. Prince touched hearts. Prince is about love.”

Lee, dressed in purple to evoke Prince’s great song Purple Rain, danced and pranced through the crowd, singing along with every song spun by the DJ playing Prince’s music.

“It’s a celebration,” Lee said. “We are here to celebrate Prince’s life.”

The party ended with a 20-minute version of Purple Rain, leaving many teary-eyed, but happy to have joined in the festivities celebrating the musician’s achievements.