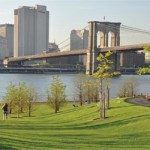 If you have the time before July 1 to get to Pier 3, it may just be worth your while. At the moment, 27 different exhibits are on display there, creating a “photographic village.” The display is being put on by United Photo Industries with creative director Sam Barzilay.

United Photo Industries has described its mission as,

“A Brooklyn-born, art-presenting cooperative dedicated to identifying, harnessing, and occasionally conjuring unexpected exhibition opportunities. All in the name of fostering conversation, championing new directions in photography, and cultivating ties within an ever-expanding, globe-trotting community of photographers.”

As Barzilay explained, “There’s never going to be enough galleries in New York City. We clearly as a startup can’t go out and rent out a giant space in Chelsea, but that doesn’t mean you can’t make great shows.”

Visitors will find 27 photo exhibits which feature a number of Brooklyn natives, and also include photographers from around the world.   Trying to create an inclusive feel, they are fencing in an area of Pier 1 to include food trucks, a dog run, a beer garden and the exhibit space.

As Barzilay explained it,

Each photographer will have a container within which to highlight his own work and his own vantage point.   Bedford-Stuyvesant photographer Russell Frederick, for instance, will show his work in one of the containers. Called “A Dying Breed” he has documented the changes in his neighborhood for over a decade.

Another artist, Josh Lehrer, is planning to wrap his shipping container with reproductions of his photos, which capture images of homeless transgenders.

As one website described the event, “Photoville will comprise a mix of free exhibitions, talks, hands-on workshops, nighttime projections and a photo dog run along with a summer food & beer garden, creating a photographic destination like no other.”

From EventsNewYorkNY.com about United Photo Industries.