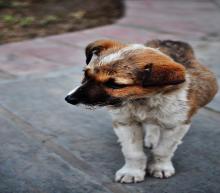 In June, an orphaned sea otter pup was found dehydrated in the Alaskan wild. The Wildlife Conservation Society’s Coney Island Aquarium was chosen to nurse the pup back to health, as they have been successful with sea otters in the past. Nicole Pisciotta, an animal keeper from the New York Aquarium, was appointed surrogate mom for Tazo, and they have been together ever since. First, she traveled to the Alaskan SeaLife Center for ten days to learn how to properly care for Tazo, where they bonded immediately. She was excited to share that he had wanted to spend the entire flight on her lap.

Tazo has been trained to voluntarily sit in a net, as well as to enjoy being combed and groomed. Pisciotta and the rest of the aquarium staff stood on guard while he learned to safely swim and dive. He eats 9 pounds of seafood a day, and has gone from weighing a mere four pounds to twenty seven in three months. Tazo is incredibly friendly, and enjoys being spoiled and groomed by his human friends. His favorite toys include chewy wheels and frozen treats. Later this fall Tazo will join Jacob, a southern sea otter, in the Sea Cliffs exhibit.