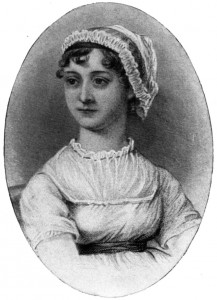 Today is the 235th birthday of Jane Austen, one of the biggest novelists in English literature. Her realism and witty but harsh social interpretation solidified her historical importance among both critics and scholars.

Very little is known about Austen’s life. She lived with her close-knit family on the lower end of English nobility, with her father George, her mother Cassandra, and her seven siblings; six brothers and one sister. Her brother’s names were James, George, Edward, Henry Thomas, Francis William, and Charles John, and her sister’s was Cassandra Elizabeth. The two sisters were very close, and both died unmarried. Of her brothers, Jane was closest to Henry, who started out as a banker and went on to become an Anglican clergyman. He was Jane’s literary agent.

Jane’s main education came from her father and older brothers, and through her own reading. Her father supported her interest in books and writing, and provided her and her sister with paper and other materials for writing and drawing. Biographers have described the Austen home as having “an open, amused, easy intellectual atmosphere.” After a short period in boarding school, Jane “never again lived anywhere beyond the bounds of her immediate family environment.”

Austen began writing early in her life. Her works include the notebooks now known as the Juvenilia, which contain the satiric novel of letters called Love and Freindship, (written in Jane’s own spelling) in which Jane mocked sentimental novels, as well as The History of England, which she declared was written by “a partial, prejudiced and ignorant historian.” The History was illustrated by her sister Cassandra. Jane’s more popular novels include Sense and Sensibility, Pride and Prejudice, Mansfield Park and Emma.   Jane died of what now is assumed to have been bovine tuberculosis at the age of 41.