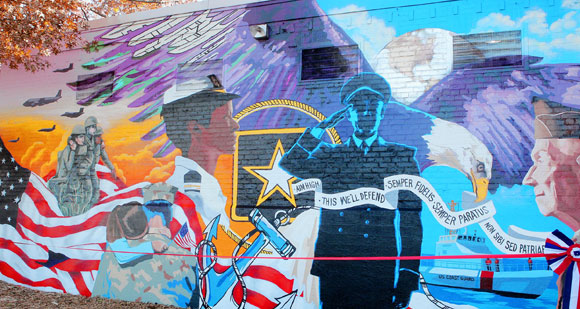 A beautiful mural was the result of cooperation between the residents of Bay Ridge, Brooklyn and the mural-producing group Groundswell. The mural, which was unveiled on November 16, is an artistic “hats-off” to the soldiers who served their country during World War II, in Korea, Vietnam, Afghanistan and Iraq. The mural was painted at the Fort Hamilton Athletic Field was the lovely result of months of collaboration between community leaders, neighborhood amateur painters, and professional muralists.

The project got underway when Councilman Vincent Gentile, Democrat of Bay Ridge, went to Groundswell to ask them to help design a memorial for war vets in the park area behind the Bay Ridge High School. Groundswell, which is a group dedicated to creating cooperative public artwork, obtained the help of Esteban del Valle, an artist who has family connections to the military.

“It was important to me to honor their dedication to our country” del Valle said.

Del Valle was assisted by Groundswell youth artists to sketch out the mural. Brothers Eric and Adon Palermo-Rojas, natives of Sunset Park and graduates of Fort Hamilton HS also helped with the planning. On November 3 the community was invited to come to the site to paint the mural. The community responded with the participation of seventy-five residents, who not only painted but also wrote letters to troops who are now on active duty. Only a few weeks later, and after a few small tweaks, the mural now stands as a beautiful and meaningful recognition of the sacrifice

soldiers throughout the generations have made for the country.

“It’s important that we honor their sacrifices” del Valle said.