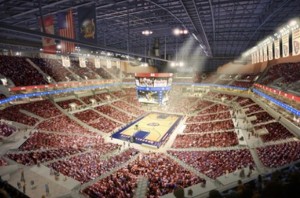 The new Barclays Center in Brooklyn has already proven to be serious competition for Madison Square Garden, winning a performance by the renowned Italian classical singer Andrea Bocelli, known as ‘The Fourth Tenor”™ next holiday season. Bocelli has performed at the Garden for nine straight holiday shows, but has booked December 5th of 2012 at the Barclays Center.

“It’s always a pleasure for me to play in New York, but I’m particularly excited to perform in Brooklyn for what will be my only 2012 performance in the city that has given me such affection” Bocelli said.

Bocelli is the most recent, and one of the biggest, names to move from MSG to Barclays Center. Before it becomes the new home of the NBA’s Nets, the arena will host a major performance by team co-owner and rap icon Jay-Z in September. His show is likely to draw other star music artists to Brooklyn.

Marty Markowitz, Borough President, said its “only natural” that Bocelli would take his show “to the big stage in Brooklyn.”

“Look out Manhattan” he exclaimed. “Not only will the Brooklyn Nets wipe the floor with your Knicks, but the Barclays Center is going to give MSG, or as we call it in Brooklyn, ‘Manhattan Square Garden’, a real run for its money” Markowitz continued.

MSG officials hope to reduce the war a bit. In a statement they said: “While we always respect any competition, the Garden will always be the Garden.” They added that “The Garden hosts over 400 events annually and has been a destination for New Yorkers and visitors to the city for over 130 years.”