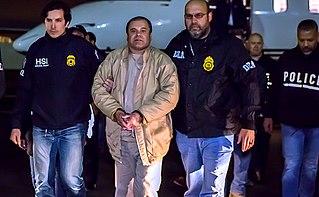 When the hearing commenced Joaquin “El Chapo” Guzman was seen waving to his wife and twin daughters, who were viewing the proceedings from the second row of the public seating in the courtroom. The judge then informed Guzman and his lawyers that the government could not promise that the drug lord’s assets would not be seized, thus depriving the lawyers of their compensation.

El Chapo, who has twice staged dramatic prison breaks in Mexico, is being tried in Brooklyn for heading up a multi-billion-dollar international drug trafficking ring which carried out multiple murders and kidnappings. He was extradited from Mexico in January, and has been held in solitary confinement in a prison in lower Manhattan.

His lawyers are worried that if the government seizes Guzman’s money, there will be nothing left to pay them. Among Guzman lawyers is Jeff Lichtman, who was able to successfully defend the son of mafia scion John Gotti. The government has said it wants to collect $14 billion in drug money from El Chapo.

Guzman’s lawyers argued that they want to alleviate the taxpayer’s burden of having to pay the public defenders the court would appoint, but only if they know in advance they will be compensated. After the hearing and Judge Cogan’s ruling, Lichtman said he still wanted to find a way to defend his client, who pleaded not guilty to charges of running a drug trafficking cartel that laundered billions of dollars and committed murder and kidnapping.

The hearing lasted 15 minutes during which El Chapo turned to look at his family several times, with clear emotion in his face. He is scheduled to spend some time with his family for the first time in seven months this Thursday.