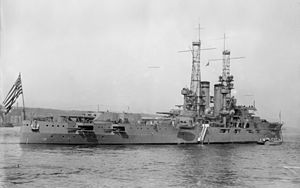 At the Intrepid Sea, Air and Space Museum, a ceremony was held to mark the 72nd anniversary of Pearl Harbor.   Gov. Andrew Cuomo ordered flags on state government buildings to be flown at half-staff.   In a news release Cuomo wrote, “on Pearl Harbor Remembrance Day, I join with all New Yorkers to pause in observance of the 72nd anniversary of the devastating attack on Pearl Harbor and remember those we lost. December 7, 1941 was truly a ‘date that will live in infamy’ that changed the course of our nation’s history and propelled the United States into World War II. On behalf of all New Yorkers, I offer my thoughts and prayers to the family and friends of those we lost at Pearl Harbor and thank the service members who continue to protect this country.”

The ceremony at the museum paid tribute to those who gave their lives in the attack as well as those who survived.   This includes Clark Simmons who is now in 90s and who served on the U.S.S. Utah.   President of the Museum, Susan Marenoff-Zausner, explained how he was forced to swim to survival following the two torpedoes that hit it. There were three other survivors at the ceremony, and they discussed their experiences with the attendees.   As well, attendees laid a wreath in the Hudson River and played “Taps” in recognition of this date in history.