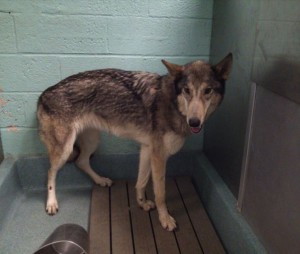 A lonely wolfdog was found in Brooklyn earlier this week, and nicknamed “Lady” and then “Rosie” by the police who picked her up.

The 53-pound dog was found wandering around the neighborhood in a chain and collar, and is assumed to be around 3 years old.

In New York City, it is illegal to own such dogs, as they are considered wild, or exotic, animals. According to Richard Gentles, spokesman for New York Animal Care and Control, wolfdogs are a cross between a gray wolf and a wolf-like breed such as a German shepherd, an Alaskan malamute or a husky.

After investigating the matter, police discovered that Rosei’s owner had passed away, leaving the dog to fend for herself in the wild. Animal welfare officials said that although the dog was found to be healthy, she was “timid and nervous” in her new, unknown surroundings.

Officials and residents familiar with the story hoped to find a new home for the gentle giant, and were relieved when Howling Woods Farm in New Jersey admitted her on Christmas Eve. According to the shelter’s website, it is a “breed-specific animal shelter that rescues and places domestic bred wolves, wolfdog hybrids and northern breeds.”

The website also explains that “Some folks believe that wolfdogs are inherently provocative and aggressive, or that they are capable of ‘turning on you.’ Just the opposite is true. By nature, they tend to be timid, loving, family(pack)-oriented and trusting of pack members.”

Rosie is now happily settled at the shelter, and is reportedly “very affectionate and seeking to bond with a special someone.”