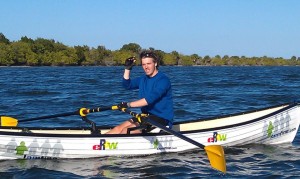 If you happened to be near the Verrazano Bridge yesterday, you just might have caught a glimse of Lewis Colam. That’s the 24 year old who decided three months ago to head out in a row boat and to row from Miami to New York. With absolutely no rowing experience in his background, Colam had the slightly crazy idea to accomplish this feat as a way to raise money for Alzheimer’s research.

Tweeting and updating Facebook along the way, Colam actually made it to New York yesterday. He arrived near the Verrazano Bridge around 1 am and then rowed along the New Jersey shoreline and up the Hudson River. He arrived at the Intrepid Sea, Air and Space Museum at about 3 pm, where he finished his long journey.

The entire trip included a 2000 mile, 100 day rowboat trip with the goal of raising $50,000 for research. Colam has been in the rowboat since March 3rd for almost 18 hours a day. He’s documented his many adventures, fighting off water snakes, sleeping in a collapsed tent and more. He did the entire journey alone on his 15 foot open-decked row boat and slept on the boat most nights.

So far, he’s raised about 50% of his goal money for the Fisher Center for Alzheimer’s Research Foundation founded by Zachary and Elizabeth Fisher. Hopefully now that he’ safely landed and managed to prove his amazing accomplishment, he’ll be able to bring in the rest of the money.
Way to go Colam!