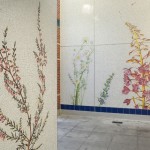 If you haven’t seen the beautiful artwork at the Avenue U station on the Q Line — you should get there soon. For the best view, take the Q train to Avenue U and then look at the southbound stairwell that leads to the street level. This art installation was just named one of the best public artworks in the US at the 2012 Americans for Arts Convention.

The winner, called Brooklyn Seeds, by Jason Middlebrook, was created in 2011 and is a gorgeous mosaic of flowers that spiral up the walls of the station. It was created with glass mosaic and ceramic tiles from Miotto Mosaic Art Studio.

Middlebrook’s art has appeared in many locations, including Central America and Europe. His goal is to express beauty in urban environments and to look at “the interaction between the organic and human in our modern world.”

The art site ItsNiceThat.com recently commented on some of Middlebrook’s art saying, “Not content with the existing patterns and geometries found in nature, Jason Middlebrook has taken it upon himself to paint new hypnotic rhythms onto slivers and cross-sections of trees, offering an alternative version seen through his eyes. Take that Fibonacci! The effects left us all pretty impressed.”