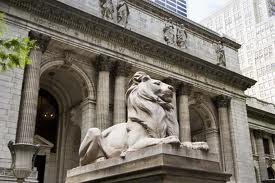 Monday was a big day for the New York Public Library: its main building opened exactly one hundred years ago, on May 24th, 1911.

Patience and Fortitude Greet You

It has been one hundred years since the majestic pair of lions, Patience and Fortitude, have adorned either side of the magnificent set of steps leading up to the iconic library building; easily recognized by almost anyone who has watched a TV show or movie in the last 50 years. The library has appeared in Breakfast at Tiffany’s, Ghostbusters, and under a glacier in The Day After Tomorrow.

Once up the stairs visitors enter a great hall two blocks long containing no books but with grand marble columns, multiplying the library’s elegance quotient several fold. According to the president of the library, Paul LeClerc, the library’s imposing and ornate design was sending a clear message out to the world when it was first built.

“New York has always been a ferociously ambitious city, even when there wasn’t very much to show off,” says LeClerc. “Those involved in creating this library wanted to create something that was on a par with the great libraries of the European capitals, especially London, Paris and Berlin.”

So the builders designed something even bigger and fancier than the library in Boston. This is the role the entrance hall plays, below which are found the stacks, where the majority of the library’s 50 million titles are sheltered.

The Credential You Present is Your Existence

One frequent visitor, Adam Gopnik, writer for The New Yorker magazine, has been coming to the library for the past 25 years. “I was stunned the first day I ever walked in here, because you just walk in here,” he says. This experience is in brilliant contrast to the greatest libraries of Europe. For instance, not just anyone can walk into the National Library of France. At this great repository of knowledge visitors need credentials just to get through the door.

“I don’t think we brood sufficiently on what a miraculous institution this is,” added Gopnik referring to the NY Public Library. “It’s not democratic in spirit: It’s democratic. The credential you present is your existence. And the resumÃ© you show is your curiosity.”