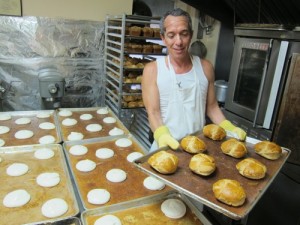 Brooklyn’s Gowanus neighborhood is home to the small business called Everybody Eats, a baking company which excludes gluten, nuts, soy, seed and pod plants in its products. The business owners, Pedro Arroba and Bruce Bassman, created the project out of necessity.

“We came up with this company because I’m a celiac” Arroba explained. “I have celiac disease; it is an intolerance to gluten. Gluten is a vegetable protein in wheat, barley and rye.”

The baked goods include things like deli rolls, baguettes, pizzas, cookies and cakes. Due to their lack of preservatives, the products are frozen and shipped out to retail stores, restaurants and numerous other customers. The products are ready to eat immediately after heating.

Gluten-free food is a rising trend, even in those who do not suffer from the disease. Arroba and Bassman know that while that is undoubtedly good for business, it may not be an ideal diet.

“There’s this kind of ‘fad’ eating thing going on. People latch on to things because they believe it will help them. Recently we have sports figures and celebrities claiming all kinds of benefits. They are not diagnosed” Bassman said. “We don’t think that is much help to the gluten-free community, because it is a serious disease and should be taken seriously. If you get off the diet, you can get very sick.”

Arroba added: “We believe that gluten is wonderful and if I could eat gluten, I would. We are not experts or doctors, we are just cooks and bakers and we create this to make the celiac happier and gluten-intolerant people happier. We are not sure if people would be doing better, being without gluten.”

Though they refuse to reveal their secret, the bakers are confident that their goods are the best in the market.