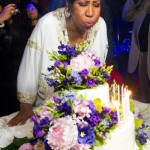 Aretha Franklin certainly proved that she still deserves “respect” as she celebrated her 69th birthday in New York City this past weekend. Friday night she joined more than 100 friends and family at a Central Park Hotel where Bette Midler, Gayle King, Tony Bennett and others were in attendance. Smokey Robinson, Clive Davis and many others paid tribute to the Queen of Soul and helped her to enjoy her birthday.

As Franklin said, “It’s a fabulous moment.” Franklin certainly looked better now than she has recently. She had to cancel a recent tour when she was hospitalized in December and underwent surgery. Now, noticeably thinner and feeling great, Franklin made up for lost time. She is set to resume her state performances in May and she seemed full of energy and excitement at her party.

While she didn’t announce ahead of time that she would be performing, she did, indeed, sing a bit. She also invited other great musicians to entertain the guests including jazz great Roy Ayers, singer Nnenna Freelon and Tito Puente Jr.

Dennis Edwards, Franklin’s frontman from the Temptations, serenaded Franklin. She eventually joined in with him and they sang, “The Way We Were” together.

She cut her birthday cake and enjoyed her party late into the night. She did explain, however, that her partying would stop there, “I will be in a horizontal position tomorrow, all day!”