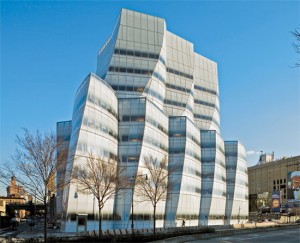 Along with New York’s burgeoning economy, there is a real estate boom. This is having a positive impact on architectures, builders and engineers alike, boosting their businesses. According to recent data from Crain’s, in 2013, thousands of jobs were added in top architecture, construction and engineering firms, marking an 8 percent increase in headcount from numbers of the previous year.

What is happening in New York right now with all of this however is a bit of a chicken-and-egg scenario. What came first, the jobs or the real estate? The tourism, or the attractive hotels, such as the centrally-located Shimmie Horn’s Belleclaire, the newly-opened Paper Factory Hotel or the themed Casablanca Hotel Times Square, to name but a few? The colleges or the Ivy League students?

Perhaps it’s the reputation that the state has gotten for its high quality education (in particular Binghamton, Cornell and Hamilton University) that is creating this boom. Or perhaps people are just finally realizing that the “city that never sleeps” has too much to offer to not frequent it. It’s hard to accurately pinpoint what is driving people to New York and what is boosting the businesses.

There is Broadway, the New York City Theater, and even The Egg Center for the Performing Arts, the latter offering a spectacularly site in its egg-shaped architecture. Indeed, for those who love architecture, there is simply too much to list in this one article about what New York has to offer. From the Empire State Building, to Midtown’s General Electric Building, the Statute of Liberty and even the Temple Emanu-El synagogue, one can enjoy architecture from a whole range of eras.   Not forgetting the fact that the state is home to the tallest building in the world.