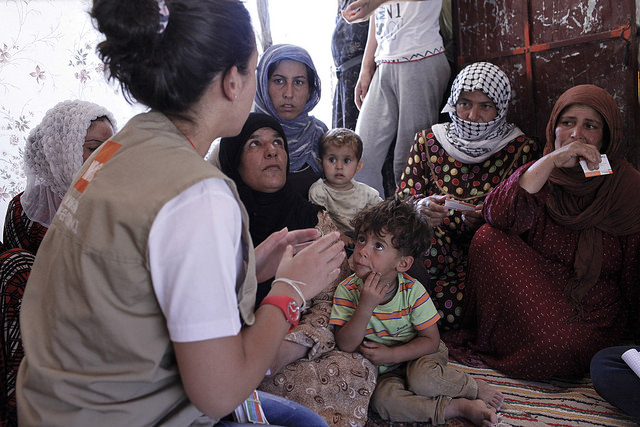 During this holiday season it is important to reflect on the many acts of kindness being done throughout the world to help those in need. Though the needs vary enormously from place to place, the help, whatever form it takes, is always appreciated, not only by those that directly benefit, but everyone who aspires for the world to be a better place.

In many places around the world healthcare is difficult to access, and when war intervenes, creating refugees by the thousands, even the most basic health needs go unmet. In July 2018 a team of physicians, including Dr. Josyann Abisaab, Dr. Martin Pusic, Dr. Christian Wilson and others, embarked on a mission to Lebanon under the auspices of Compassionate Care.

The group went to the area near Tripoli and Akkar to help those fleeing for their lives from the violence of the brutal Syrian civil war. The doctors came from many regions in the United States such as New York, Colorado and Texas; and specialized in a diverse selection of medical specialties such as Josyann Abisaab: emergency medicine; Martin Pusic: pediatric emergency medicine; cardiologist Altaf Pirmohamed; and Christian Wilson: internal medicine.

The group’s first mission out of what they hope will be many more, they stayed and helped the refugees for six days, bringing desperately needed supplies along including: antibiotics and other medicines; equipment such as oxygen, gauze, bandages and more; shampoo to combat lice infestation; and dental supplies such as toothbrushes, toothpaste and floss.

There is no question that the intervention by this group of dedicated doctors not only enhanced but also saved lives. They gave prenatal care to 60 pregnant women and at least 200 children, treating a total of 400 Syrian refugees and Lebanese patients on the first two days alone, by the fourth day almost 900 and by the last day of the mission 1200 patients had been seen.


Even patients that the team could not directly help were able to find the care they needed through the efforts of the group. One boy who needed a bone marrow transplant was transferred to Medecins Sans Frontieres and the French Government with the hope of ultimately getting a BMT in France. Another child with an aggressive brain tumor was able to receive the palliative care he needed to die with dignity was brought to the American University of Beirut’s Children’s Cancer Center. There are several other cases which are still being dealt with by this team of dedicated physicians.