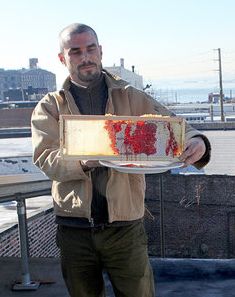 Bee keepers from Red Hook, Brooklyn, were mystified by the syrupy red substance found in their hives in the place of regular honey. They discovered, after testing the stuff, that it contained a high level of number 40 red dye, which is commonly found in the juice of maraschino cherries.

The bee enthusiasts now assume that the bees often visit Dell’s Maraschino Cherries Company’s nearby vats before returning to their hives. Some of the keepers could not believe it, and thought that the strange honey was a result of an unusual tree. The head of the New York City Beekeepers Association was not surprised, however. “Bees will forage from any sweet liquid in their flight path for up to three miles” he said. Another keeper has described the eerie look of the hives: “When the sun is a bit down, they glow red in the evenings. They are slightly fluorescent” he said.