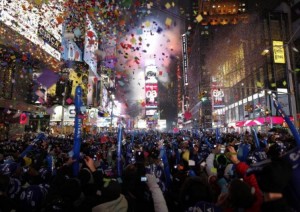 Times Square has been the center of the world’s New Year’s Eve celebrations for 106 years, ever since the owners of One Times Square started their rooftop festivities to greet the New Year. The Ball was first dropped in 1907, and this tradition has since become a global symbol of New Year’s. Over one million people gathered in Times Square this year to watch the famous lowering of the crystal ball (which is the biggest in the world).

The crowds began to arrive in the early afternoon, braving the tight security and low temperatures for over eight hours. The entertainment included the Backstreet Boys and the New Kids On the Block, Taio Cruz, the Broadway Cast of American Idiot and Ke$ha, as well as a wedding that was held in the center of the celebrations. The couple, Bethany and Geoffrey, met each other while serving in Iraq. Nivea also held a kissing practice and a kiss-off, with the winning couple selected for a prize.

This year, the Times Square Alliance, which puts on the event, chose a charity to sponsor: Stand Up to Cancer. MasterCard Worldwide said it would match dollar for dollar charges, up to $1.5 million, to support cancer research and treatments.