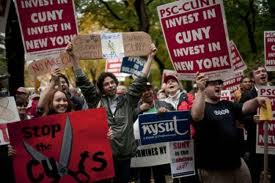 According to Frances Fox Piven, professor of political science and sociology at the CUNY Graduate Center, perhaps the change in protest method between today’s students and those of the past are a slow start at discovering their militancy.

“I think they are more militant than in ’75-’76″ the years of fiscal crisis when CUNY finally went from being a free university to charging tuition, Dr. Piven said.

But today’s protestors are nothing like those of the 60s. “I think not yet, not yet” she said. “But movements have a very distinctive dynamic. They can escalate very quickly. It’s not as if all the ideas that are associated with protesters are in place when the protest starts. It’s the protest itself that changes people’s ideas, that engages them and that in a sense educates them.”

Traditionally CUNY was meant to be a place where the children of the poor could get the best education available, but with no charge. Its history began in Victorian times when precursors to CUNY were founded on the belief that even the children of working men should be extended the chance to receive a free education. During the early and mid-twentieth century CUNY was a “beacon of light” for the children of immigrants. City College was the flagship school and considered by many to be the Ivy League school for the poor, who were shut out of places like Harvard and Yale. Perhaps because of this type of student body, filled with dissenters with leftist tendencies due to their socio-economic backgrounds CUNY became the “perfect laboratory for the type of protest which needed a battalion of police officers to cool down.