At 1:51pm on Tuesday, August 23rd a geological event more familiar to west-coasters then denizens of the eastern sea board, an earthquake registering 5.8 on the Richter scale struck an astounded population with shakes and rumbles. 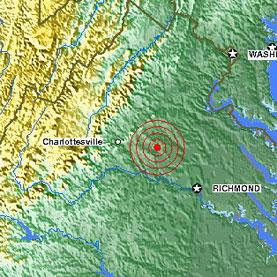 The earthquake was centered near the town of Mineral in Virginia, and produced two aftershocks measuring 2.8 and 2.2 with one and a half hours of the initial 20-30 second tremor. Seismologists were quick to calm the public by declaring that there was little reason to remain alarmed, since the quake was produced from an old fault which most often creates weaker quakes, much different than its sister fault, the San Andreas, in California.

The easterners can consider themselves lucky. Despite the quake having been one of the strongest to occur along the east coast in decades, damage was light. Reports of feeling the shaking were received from as far away as Alabama to Sudbury, Ontario, Canada, where public offices were officially closed.

Here in New York thousands of office workers left their buildings in Midtown Manhattan, while further south the police ordered the evacuation of City Hall. The mayor and his staff found themselves outside for an unplanned, extension of their lunch breaks.

Reactions among those who felt the tremor varied considerably, from blasÃ© “no biggy” to quite “shaken up.”

William Schroeder posted on nytimes.com that he

“Felt a little wobble here is Astoria, but none of my Scotch fell off the shelf.”

Bill Parks of Hummelstown, Pennsylvania sent out an email describing his experience in the quake: “I ran outdoors and found my neighbor calling a friend in Virginia who also felt the profound quake. This quake was like none I ever experienced in the East in my life and I am 76 years old.”