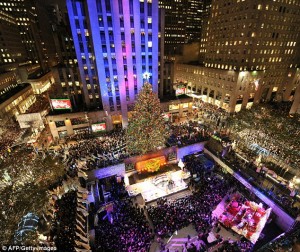 Rockefeller Center in New York City has been transformed into a magical winter wonderland to host the stars that came out for the annual lighting of the Christmas tree.

The 12-ton, 74-foot tall tree’s 30,000 LED lights were not enough to illuminate the entire audience of 50,000 people who crowded in the streets for the event. This year’s tree, a 75 year old Norway spruce, came from the yard of a New York City firefighter named Peter Acton. Acton was one of the first firefighters at the scene on September 11th 2001. The tree is lit every day until mid-January, and for the full 24 hours of Christmas day.

The spectacular event was viewed by millions on NBC television.