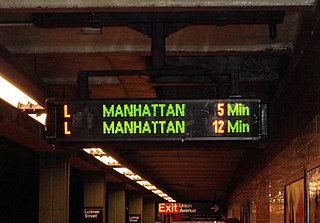 If you’re the kind of person that wants to know exactly how much time you have until your train arrives at the station, this personal train clock is for you.

Just in time to makes it way under your Christmas tree, the NYC Train Sign is the home version of the digital displays we see popping up now all over the New York City subway system. Propped up on your living room bookshelf, or mounted next to your door, now you can plan exactly when to leave the house to catch the very next train, without any undo waiting.

There are several kinds to match individual tastes, including wood, plastic or metal models.

The founder of the start-up that produces this novelty item is Timothy Woo, who says he built his first one for personal use in his Bushwick home.

The prices begin at $300, worth every penny if it will make your life more convenient.

“Some people want them for home décor, as art or novelty items. Some people buy it for sheer practical reasons,” Woo said. “They live very close to the subway and actually want to look up at the clock and know when to run out the door.”

Woo says he keeps one in his window as a public service. The sign attracts small groups of people to his house to see when the next train is due. As far as what the MTA thinks of this personal train clock, Woo says he does not know.

“They haven’t responded to us directly, but I’m sure they have a lot of other things to worry about,” he said.